I’m not sure exactly what happened between Austin and New Orleans. Whatever it was, it took forever. Though, things do tend to take longer when you are afflicted by what most surely would’ve been the 11th biblical plague had the Egyptian situation escalated any further.  Food poisoning, stomach flu, gurgly boom-boom belly, call it what you will – Robbie had it. And just in time for the Cajun capitol of the world, New Orleans!

Gloria (the RV, remember.) had had a hard few weeks. It was time for her to let loose.

Hundreds of inebriated, intoxicated, indulgent young adults (presumably of legal drinking age) thronged around Glorias sand blasted, sun bleached fiber-glass side panels as she inched forward. Gloria was perpetually flattered by the hoots and hollers of adoring young men. Beads rained down from balconies, ignoring the fact that it wasn’t actually Marti Gras. A more experienced Bourbon Street patron gave the exuberated suggestion that we “Load up the bus with – respectable young ladies[sic].” To top it all off, a mule driven buggy filled with Dixieland sightseers gave us the right of way as Gloria slipped back into normal traffic and left the party behind.

The next few days were devoted to leisure as we hadn’t a concert planned for this city. Of course, that didn’t stop us from filling the streets with music. But first we decided to take in a little culture.

Over the next few days, Rob began his emotional journey back to his boyhood love, the trumpet: Robbie fell into infatuation with a voluptuous, street jazz clarinetress thrice his age: and Dan irresponsibly let a grad student stand on a bowling ball and juggle machetes over his man bits to the applause of a crowd.

After all of that, and more, we took some time to share the music. As for our reception on the streets of The Big Easy? People danced, sang a long, took pictures and overall, asked far too many questions.

After all the excitement, it was time to mosey on up to Nashville Tennessee.

Home to the most recognizable music industry in the U.S. (and most probably the world,) Nashville also boasts some of the greatest deals on cowboy boots a young country star could ask for. Buy one pair, get two free. Who could resist?

The first order of business in Nashville? Laundry.
Thats where we met this little guy:

His name is Marcell, and his feet don’t reach the pedals.

Even though we legally couldn’t hire him to be our driver, he’s still a fan.

While in town we met up with the fat cats from The Country Network. One of the big shots, Kent, wined and dined us at one of Nashvilles most semi authentic-ish Mexican restaurants and explained how our music video for “The Heart Leads the Way” would now be included on a new internet music video platform called Zuus Media. Think of it like a Pandora.com for music videos. Cool, I know. You can find us in the “Americana” section under the country tab. Yeehaw.

Doug Frasure is the host of a web series called “Gigging & Grubbing” which highlights new musical talent and their appetite for local fine cuisine. Doug took us to a Nashville area favorite called Sal’s Pizza. There, we filmed a short segment, hosted by Doug, in which Robbie tried his hand at spinning pizza dough. To the humor of Doug and to the chagrin of James (Sal’s in-house pizza dough spinning expert) Robbie managed to devastate a perfectly good batch of dough;perforating the pie with his barbaric technique.

After all of these shenanigans, it was time to play some music. The show was at a notable Nashville venue called The Listening Room – a large, open, brick walled room dotted with dozens of black tables. The venue is known for hosting original artists with original music and avoiding 80’s cover bands. A special mention – The Listening Room has, insofar, provided the most potent and agreeable of sound technicians. High five, sound guy. 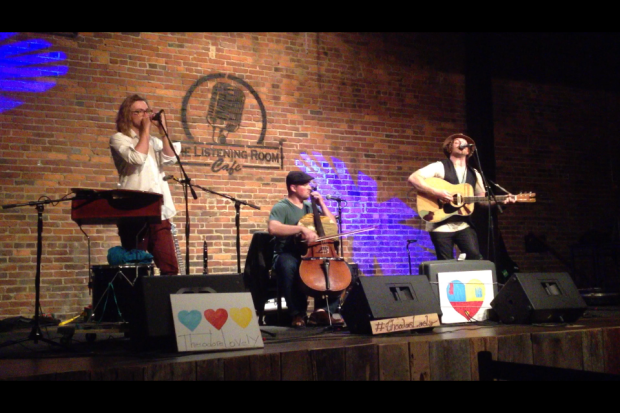 Lastly, we would like to thank the endlessly good-looking patrons of The Listening Room for being so enthusiastic and appreciative of our music, including but not limited to the young ladies at table five.

The next day we collided with another group of adventurous friends. Jessie and Katie, long time friends of Robs, just happened to be passing through Nashville on some long distance cat errands. Jessie and Katie are two awesome gals who’ve journeyed all around the big ol’ rivers on a sailboat with their cat, named Bird, and the galaxies most friendly, well behaved canine, Reggie. (click here to read more about their adventure)

Here are the girls checking out Gloria: 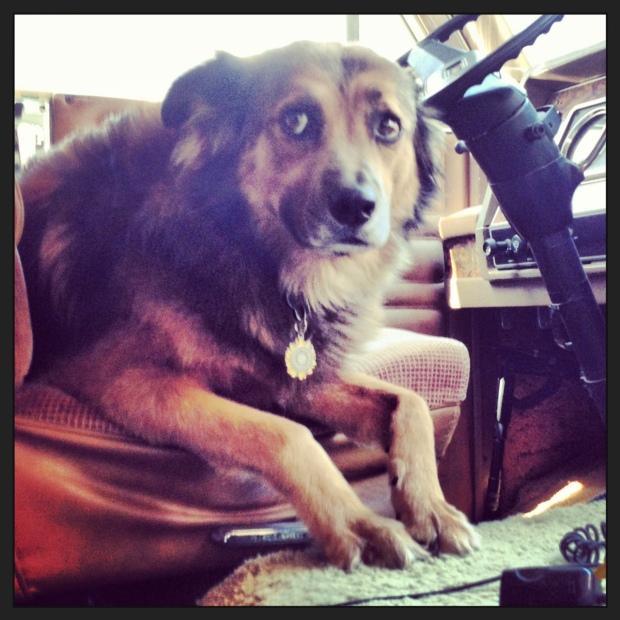 When the applause faded, we went ahead and dropped off some CD’s at some preferred record labels in town before setting off for our next destination, New Joyzee.

(An honorable mention to Bailey Smith, her roommates, and their pets for allowing us inside their home and permitting the use of their showers and soft fur.)