Kentucky, Virginia, Maryland, and Pennsylvania plot the route from Nashville Tennessee to our next destination. Excitement built as we crossed state lines, each one bringing us closer to the place of Robs rearing, Ramsey, New Jersey.

New Jersey is beautiful this time of year. Not regular beautiful – More like “the headless horseman is going to ride out from those twisted, gnarled trees on his hell steed and claim ownership of everything above my neck. But it’s ok, this place is so charming.” type of beautiful.

Before we arrive in Ramsey, it was time to celebrate some Easter! So we headed for Princeton New Jersey to meet the entire Armenti clan for a classic Easter afternoon feast!

Did you notice that the last blog post was devoid of frustrating RV breakdowns and mishaps? The wind was in our sails, the sun was shining and Gloria was purring like a kitten in a sock drawer. Crowds of people from all over the country would gather at the sides of the highway just to see us roll by with confidence and pride in the reliability of our Gloria. They would cheer and hold out their babies for us to kiss -thus blessing the infants with a lifetime of mechanical good fortune.

I promise on my crossed fingers that the previous paragraph is not just one big comedic setup for a break down scenario. I am not so lacking in literary subtlety and shrewdness that I would so obviously prepare you for a predictable turn of events like Gloria Southwind, our steadfast and beloved RV, frying her electrical system crispier than a basket of TGIF jalepeño poppers. 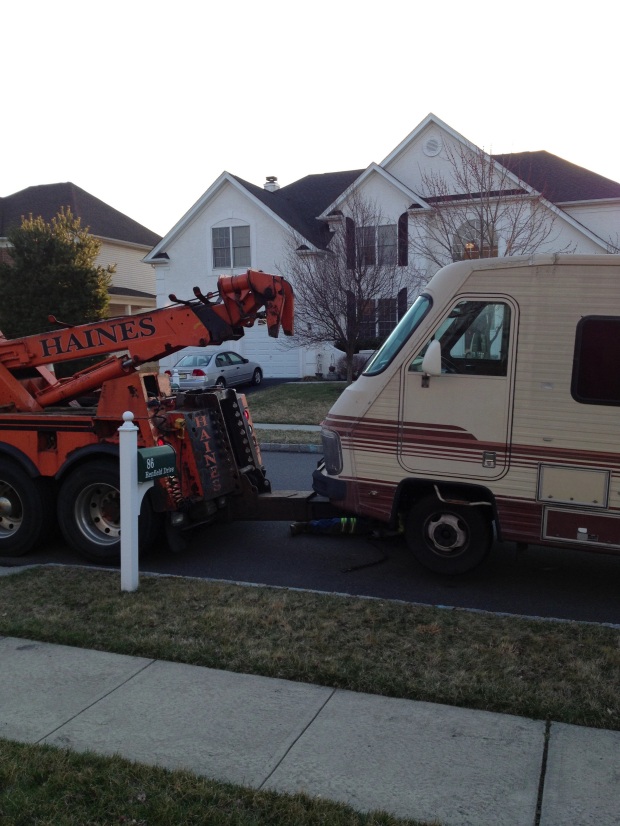 We stood on the front lawn on Easter evening, our bellies full of Lamb, watching one more tow truck drag Gloria dolefully down the street. Leafless, meandering branches scraping her rooftop as the tow trucks blinking yellow lights rounded the corner. See you in Ramsey, Miss Southwind.

Ramsey: Homeless brown leaves skitter across the streets and parking lots, collecting in alleyways and storm gutters with their fellow homeless leaves, huddling close to keep warm. The skies turn from grey to blue in an instant, only to run grey again when your jacket is locked safely in the car. The New Jersey Transit Authority adds to the soundtrack of a breezy afternoon with train whistles, clicking tracks and prerecorded destination alerts at amorphously precise intervals.

Ramsey is a small town – technically a borough, (west coasters see http://en.wikipedia.org/wiki/Borough if you want to know what the hell a borough is) that boasts just a half hour drive from the George Washington Bridge, our gateway to New York City.

We rolled into town, as we usually do, late into the night. We were greeted and tucked in by Robs loving parents, Robert and Patti Armenti.

Over the next two weeks we have 3 shows. Two shows in New Jersey and one in New York City. And betwixt our trifecta of planned performances, we had all sorts of fun.

In homage to a beloved internet tradition, here is a compilation of some of our activities in list form:

Our first show in the area was at a new jersey local hang out called Shortways Barn. A raised platform put us 6 inches above the dining room floor where new jersey-ans feasted on hot wings and pitchers of beer. Between us and the bar was a low divider made of good old fashion wagon wheels,  between the splintered spokes poked the rosy noses of drinking Ted Love fans. 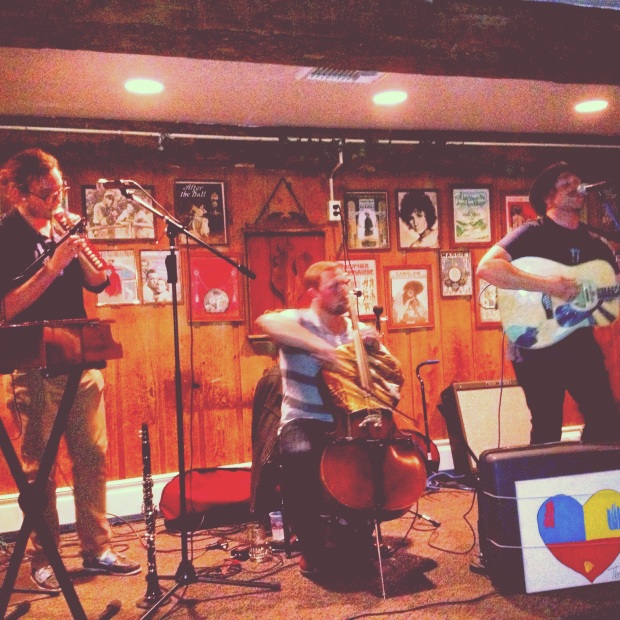 Our second show on the east coast was in New York. That night Sullivan Hall was a prime attraction for New York hipsters, rockers, and loving family members. Four bands played; ranging in genre from singer songwriter, solo alternative blues rock, alternative punk ensemble, to Theodore Lovely, whatever we are. We played our little hearts out as we stood on what seemed to be the grey tattered remains of oriental style rugs duct taped to the stage, disintegrated by the endless shuffles of performing musicians. 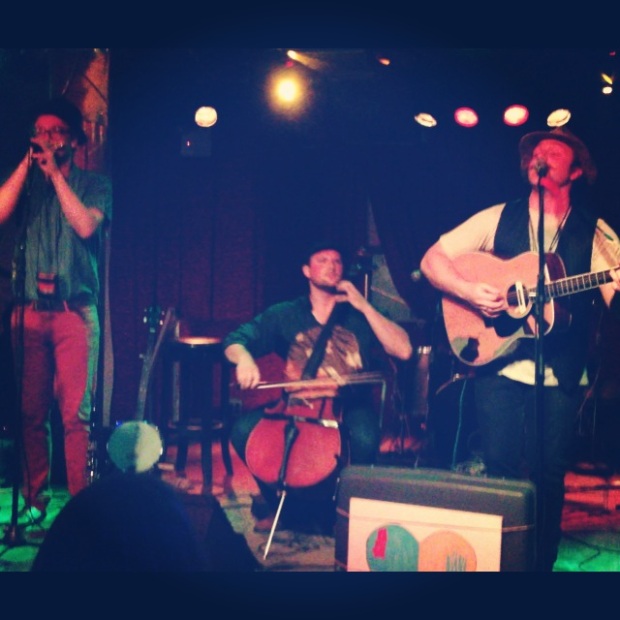 Our third show could be called the flagship show of the whole tour. This took place on Long Beach Island, New Jersey.  This performance was to aid in the raising of funds for a wonderful hurricane Sandy relief project called “Rock for Sandy,” created and sustained by the awesome apparel company, Jetty. Jetty as many of you already know, helped us out big time by donating our awesome tour shirts, as well as a bunch of other helpful details. 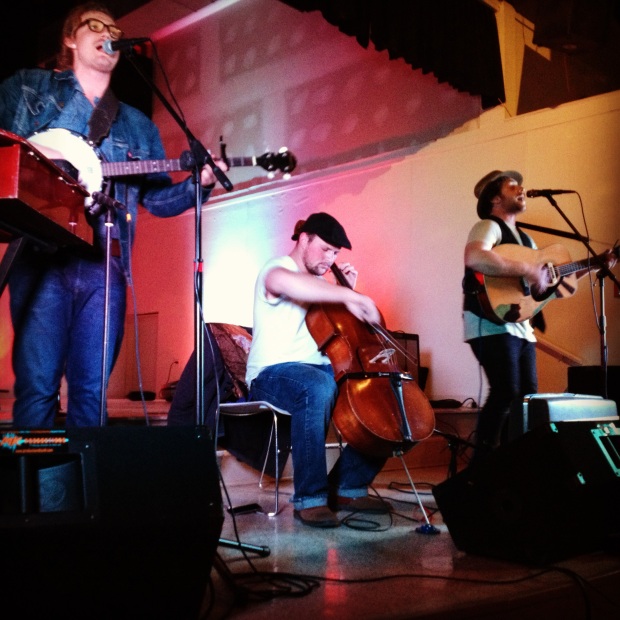 The night was filled with awesome catered coastal food, raffles, drinks, and of course a lot of musical foot-tappery. The 400 some odd people, all loaded up on oysters and beer, were exceedingly generous in their approval and made us west coasters feel right at home. Bravo to Jetty for putting on such an excellent event for such an awesome cause. 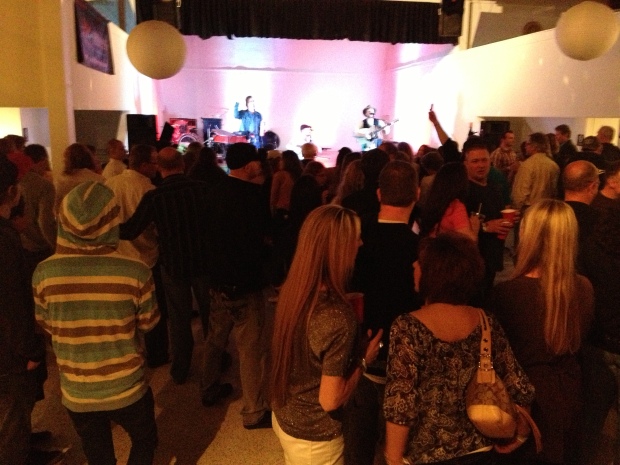 The next day we packed up our newly bandaged Gloria, complete with new electrical innards, and headed west for the second 5000 mile leg of our tour. We were headed to California, but we had some stops to make first. Onward to Colorado for a good ol’ fashioned, boot stompin, cat wranglin’, barn shakin’ Hoe Down!
Although Colorado had some very cold plans for us. 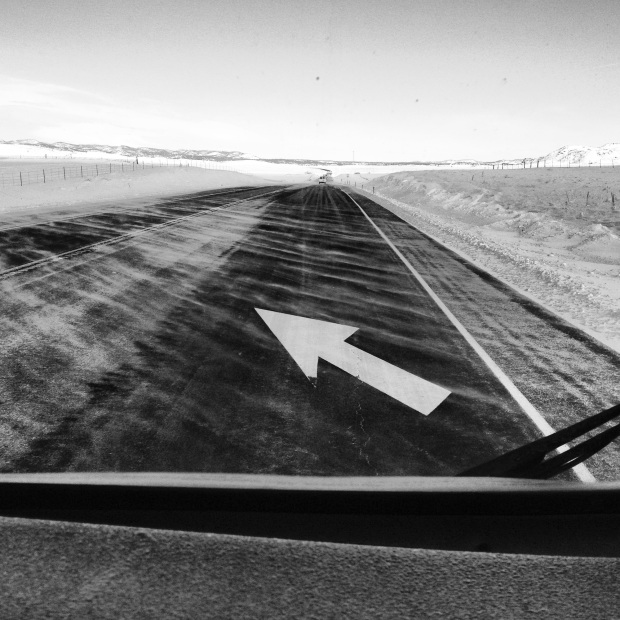 One thought on “The Heart Leads the Way: Big O’l Blog Post #5”